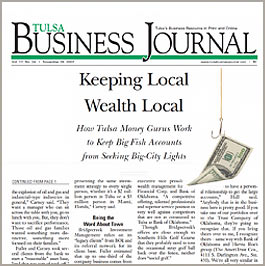 Beyond $15 million is where an account ceases to be “merely” that of a wealthy individual but belongs to a well-endowed family legacy. Most families keep their money managers in-house and under wraps, but one local money management firm has built its business model around serving wealthy families in Texas and Oklahoma.

“They (Smith and Brock) were looking to create a firm that was unique to Oklahoma,” Fuller said. “They had to go to Dallas, New York, the West Coast to get so-called Wall Street—type money management. Having been in those firms and being with a bank, we thought it was time to create a firm that brought those best practices to Oklahoma and keep the money here locally.”

Fuller started his career in money management with Merrill Lynch Asset Management in Dallas while Carney made his start at JPMorgan Private Bank, also in the Big D. While at the Bank of Oklahoma, Fuller and Carney were members of the asset allocation and stock selection committees and managed more than $1 billion in assets.

The firm has been a great fit for Tulsa’s blue chip families, Fuller and Carney said, who “really needed it because of the explosion of oil and gas and industrial-type industries in general,” Carney said. “They want a manager who can sit across the table with you, go to lunch with you. But they don’t want to sacrifice performance. Those oil and gas families wanted something more distinctive, something more focused on their families.”

Fuller and Carney took several clients from the bank to start a “reasonable” asset base, “and that just sort of took off,” Carney said. “Returns have been really strong,” and though specific numbers were not available for print, the rates of return have significantly outpaced the market. Since the firm’s inception, Fuller and Carney have brought about 60 families to Bridgecreek, which totals $360 million in assets under management.

Before Bridgecreek Investment Management, Fuller and Carney said many Tulsa families couldn’t justify keeping their accounts with local firms when Dallas and New York came calling not only with tickets to the theater and limo rides, but also with a slew of investment options tailored for the ultra-wealthy.

“I think what really disdained these families was the mutual fund model and the vanilla solutions that were here,” Carney said. “If you’ve got something that’s world-class and you have north of $5 million to invest, you really don’t want to put it in some mutual fund. If you’ve got $5 million, you ought to be able to buy some stocks and bonds and have a diversified portfolio.”

“I think that gives you a competitive advantage when you go in against the Wall Street firms, and they’re looking sort of cookie cutter and everyone’s got the same portfolio, they’re going after the same people and they’re not specialized. They’re basically presenting the same investment strategy to every single person, whether it’s a $2 million person in Tulsa or a $5 million person in Miami, Florida,” Carney said.